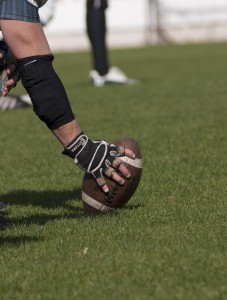 You have probably seen it: the video of the two defensive backs targeting and intentionally hitting a referee. While an investigation is underway and criminal charges may be brought, let’s look at the incident from a tort perspective under Tennessee law.  A tort is a legal claim for personal injury or wrongful death in which money damages are sought.

While many news outlets are indicating the local District Attorney is considering assault charges, the referee probably does NOT have a civil claim for assault, but he clearly does have a claim for battery. Let me explain why I say that. Under Tennessee law, a battery is an intentional act that causes an unpermitted, harmful or offensive bodily contact. In the video, the referee has his back to the two players and immediately after the play starts the players attack him. The hits are clearly a battery upon the referee. On the other hand, an assault is better explained as the threat and apprehension of a battery. In other words, a person is not guilty of assault unless the victim has a reasonable fear of imminent physical harm.

Generally, assault and battery go together because right before you get hit by someone you are aware it is about to happen. But in this case, the referee had his back to the two assailants. So, he did not appreciate the battery was about to happen. Because he did not appreciate he was in imminent physical harm, he was not assaulted. But, again, he most assuredly was the victim of a battery.

The next question is the harm caused by the players’ battery. I have not seen anything about what injuries, if any, the referee sustained. Given the spearing that he took from behind and while prone on the ground, serious injuries to his back or head could have occurred. The players can be held responsible for any injuries they caused and be required to compensate the referee for any medical bills, pain and suffering, lost time from work, etc.

One final thing about battery: because it is an intentional act, most insurance policies exclude it from coverage. Therefore, the person who commits the battery must pay for the harm they caused from their own personal funds or assets, if any exist.

Yesterday, reports surfaced that the referee allegedly used racial slurs against the players which provoked the attack. Our next post will discuss the defense of provocation to a claim of battery and also whether the racial slur allegation might also constitute a separate tort of defamation.

If you or a loved one has been injured or killed and would like to know whether you might have a case, we offer a free, no-obligation consultation with one of our award-winning lawyers. All you have to do is call our office at 615-742-4880 (Nashville) or 615-867-9900 (Murfreesboro) or 866-812-8787 (toll-free from anywhere else in the State). We handle all injury and death cases on a contingency basis so we only get paid if we recover money for you. We have helped our satisfied clients recover millions of dollars and we are here to help you too.