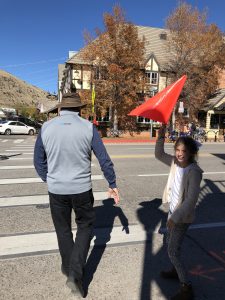 We went to the Grand Tetons and Yellowstone for Fall Break.  While walking in downtown Jackson, we noticed flags stuck in posts at intersections.  The first time we saw them we thought they were related to some work being done on the wooden sidewalks.  But as we continued to walk, we noticed they were at all the intersections in the busy shopping area.  We then realized what they were for: pedestrian crossings.  The Jackson Hole area does not have many street lights.  Presumably, the community has made a decision to limit the amount of artificial light to offer better star-gazing and protect the natural beauty of the area.  So to increase pedestrian visibility, the town has installed these bright neon orange flags at intersections for pedestrians to use while walking in the crosswalk.  Once safely on the other side, the pedestrian simply places the flag in the available post.  (Yes, that is John in the hat and Kate waving the flag — I was taking the picture)

Of course, it does not matter how visible you are if a driver is not even looking at the road but instead looking at their phone.  And tragically, this is occurring more and more often.  After decades of declining road fatalities, the United States has seen car accident fatalties rise by nearly 15%.  In 2016, more than 100 people died in car accidents every day.   After studying the causes, researchers concluded the surge in deaths was not attributable to more miles being driven or a material increase in speeding or drinking and driving.  Instead, the increased death toll is linked to smart phones.  And not surprisingly, pedestrians, motorcyclists and bicyclists are the ones most at risk because they are easier to miss when you are distracted. Last year, there was a 22% increase in fatalities for pedestrians, bicyclists and motorcyclists with almost 6,000 losing their lives.

Most researchers and law enforcement believe distracted driving is a much bigger problem than drunk driving for three simple reasons.  First, many drivers are addicted to their phones and do not use them to talk but instead to text and manipulate apps which requires them to take their eyes off the road.   Second, using your phone while driving remains socially acceptable.  Sure, most people know they should not do it, but they do not face any societal backlash when they do it as compared to drunk driving.  Third, detection and enforcement remains a problem.  Unlike drunk driving where a law enforcement officer can objectively determine a driver’s BAC via a breathalyzer, no such test is available in the context of smart phone use.

While we all use the term “accident” to describe car crashes, the striking of a pedestrian, motorcycle wrecks and the like, if a driver was texting or using an app instead of driving, it really was not an “accident”.  And the driver should be made to take responsibility for the harm caused.