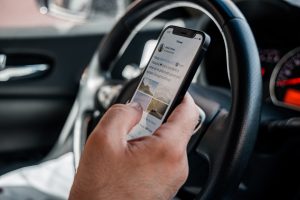 Many insurance policies have an exclusion which allow them to avoid paying any benefits if the insured was participating or attempting to participate in a felony or illegal activity.  In Tennessee, and most other states, it is illegal to text and drive.  In fact, since 2019, Tennessee law has prohibited a driver from even holding their phone.   The law was designed to make it easier for law enforcement to know if someone was texting and driving as opposed to talking on the phone, etc.  Because holding your phone while driving is illegal and texting and driving are illegal, if you are doing one of these activities while driving and you are killed in an accident, the insurance company could try and deny coverage under an Accidental Death policy.

In police reports, law enforcement officers must assess and note the cause of the accident whether it is speed, failure to yield, texting and driving (based on phone records), etc. In an effort to deny coverage, insurance companies are starting to seize on the officer’s determination of the cause of the accident.  Of course, this has wide-ranging implications beyond just texting and driving which has been the emerging issue. Speeding is illegal. Failing to yield is illegal.  Running a red light is illegal.   As such, we could start to see insurance companies denying coverage more and more for common rules of the road mistakes by simply portraying them as illegal activities.  While historically, these “participation or attempt to participate in a felony or illegal activity” have been used to exclude coverage for more egregious behavior such as an insured robbing a bank and getting shot and killed by a security officer and then attempting to collect a death benefit.  However, one of the first rules of contract interpretation is that the words of the contract prevail and so illegal activity could be the mistake of failing to yield, etc.

To be sure, these are not open and shut cases.  The insurance company will have to prove the insured was engaging in illegal activity and supposition by a police officer who did not see the accident is unlikely to be sufficient.  But if the insured’s phone indicates texting was occurring at 9:50 p.m. and the black box data or witness testimony indicates the accident happened at or about the same time, then the insurance may be able to avoid paying the benefits for which you have been paying premiums.  Even if you can ultimately prevail with the help of an experienced lawyer, you are not going to be paid the benefits for a long time while the matter is litigated in court and you will have to endure the litigation and all it entails.

If you need help fighting an insurance company, our award-winning lawyers are here to help.  Give us a call for a free consultation.