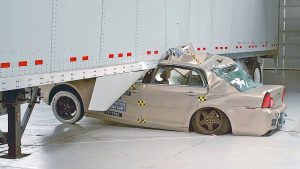 An underride accident is when a car, SUV or passenger truck goes underneath a tractor-trailer.  Underrides typically occur from the rear or the side.  Regardless of the type, the key parts of the vehicle that are designed to prevent intrusion into the occupant compartment like the bumper, frame and pillars are either not engaged at all or only partially engaged.  So underride accidents typically have a tremendous amount of intrusion into the occupant compartment and then, not surprisingly, a high rate of fatalities.   These underride accidents kill on average about 219 people a year, but many experts believe that number is low due to underreporting and, although there are ways to prevent these types of accidents, not enough has been done.  But, that might change with a new bill.

The STOP Underrides Act, which is sponsored by Marco Rubio (R), Kirsten Gillibrand (D) and John Thune (R) would require improvements to the current rear guarding on tractor-trailers and also provide front and side guards.   Currently, rear guards are not required to be inspected despite routinely being damaged at loading docks or if backed into an object.  The bill would also require front and side guards on new vehicles as well as retrofits on existing trucks.  The bill applies to all semi-trucks, trailers and single until vehicles with a gross vehicle weight in excess of 10,000 pounds.

Many underride activists would also like to see changes to how state and local police code accidents.  Because many crash reports do not have an indication for an underride accident (Tennessee’s Uniform Traffic Crash Report does not), experts believe underrides accidents are not correctly documented resulting in underreporting of these types of serious accidents.

If you or a loved one has been injured in an underride accident, our award-winning lawyers are here to help.  Simply give us a call for a free, initial consultation.  We will review your case with you and let you know if we think we can help.  If we think we can and you decide to hire us, we handle all tractor-trailer accidents, including underride accidents, on a contingency basis.  A contingency basis means we only get paid if we recover money for you.  And unlike some lawyers, we advance all case expenses interest-free, so you do not have to pay anything out-of-pocket to pursue your rights.  For more information on fees and expenses, click here.

Then to find out if you have a case, give us a call at one of the numbers below: