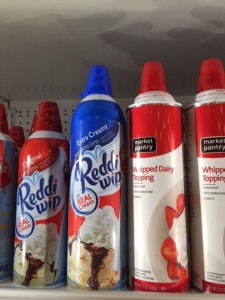 Last week, a Franklin woman drove her Lexus SUV into a ditch. After she managed to get her vehicle out of the ditch, she proceeded along Battle Avenue until she crashed into a brick mailbox. When police arrived on the scene, they found the driver disoriented. Upon searching her vehicle, they found 13 cans of nearly empty whipped cream. According to reports, the driver had been huffing the aerosol in the whipped cream cans in order to get high.

Of course, a natural reaction upon hearing this story is to titter and then crack all sorts of wise comments. But, we need to remember that impaired driving is impaired driving. It really does not matter whether you impairment stems from alcohol, prescription drugs, street drugs, whipped cream or something else. If you are impaired, you should not be driving.   Fortunately, for this woman, she did not hurt anyone else or herself.  So how common is this problem?

These increases are significant when you consider that marijuana users are about 25% more likely to be involved in an accident than a person not under the influence of marijuana. A 2009 study by the National Highway Traffic Safety Administration found that 18% of fatally injured drivers tested positive for at least one drug (either prescription, illicit or over the counter)

Males and young drivers are more likely to engage in drugged driving. But as the 28 year-old whipped cream female driver shows, drugged driving is not limited to one gender or age group.

If you or a loved one has been injured in a car accident with an impaired driver, whether it be a drugged driver or a drunk driver, call us and one of our top-rated attorneys will review your case, answer your questions and explain your legal options in a free, no-obligation consultation. We handle all accident cases on a contingency basis, and we advance all case expenses so you are never out of pocket any money to pursue your rights. Call us toll-free at 866-812-8787. We handle accident cases across the State of Tennessee.