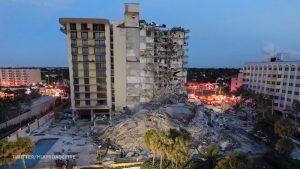 The rising death toll and enormous property loss arising from the collapse of the Champlain Towers South Condominium building near Miami, Florida will give rise to litigation.  Families of those who die in the tragedy will file suit, hoping to find answers and obtain compensation for the loss of loved ones.  Injured people will also take legal action, seeking money to pay medical bills, replace lost income, and lost property.  The insurance companies who sold homeowner’s insurance to the condo owners will also file suit, seeking reimbursement of the losses they will pay to their insureds.

The lawsuits will almost certainly be governed under Florida law.  But what happened if the same situation occurred not in Florida but instead in, say, East Nashville.  What rights would the dead, the injured, and the property insurers have under Tennessee law?

Initial reports indicate the building was not properly constructed and in fact was scheduled to be repaired.   Whether the original construction issues were a design error, a construction error, or both would make little difference under Tennessee law.  Why?  Because Tennessee has a law called a “statute of repose” that lets architects, engineers, and contractors escape liability four years after the construction is complete.  The building that collapsed in Florida was built forty years ago and thus, if Tennessee law applied, those involved in the original construction would face no liability at all.

There is one exception to the four-year “get out of jail free” card – fraudulent concealment of the defect.  Proving fraud is a high hurdle for claimants to jump; whether they could is dependent on the facts that will be revealed in the coming months.

A lawyer attempting to determine who bore legal responsibility for the collapse would also look at whether a defective product used in the construction caused the collapse.   Under Tennessee law, such an investigation would not give rise to a legally viable claim by the claimants – our law does not permit product manufacturers to be held responsible if the defective product was more than ten years old at the time of injury, death or loss.  The only exception to this rule under Tennessee law is if the person injured or killed was under the age of eighteen.   Thus, the manufacturer of any defective product installed as part of the original construction would not face liability under Tennessee law, unless (once ) a minor was hurt or killed.

News reports indicate an engineer warned in October 2018 that he had discovered “major structural damage” to a concrete slab below the pool deck section of the Champlain Towers South building. And, apparently, other inspections were conducted as well, perhaps by city or county inspectors.

Under Tennessee law, a private company that conducts an inspection has a duty to do so competently and consistent with good practices in the industry.  Time will tell whether the inspectors did so; if they failed to do so, liability is possible.  But under Tennessee law, any errors by city or county inspectors do not give rise to a valid claim – neither a city or county can be sued for negligent inspection of buildings or their components.   This is shocking to many people because the law often requires the inspectors from “codes” to inspect buildings at various stages of the construction process in Tennessee.  But legally, neither these government inspectors nor their employers are liable if they do so negligently.

Presumably, any recent inspection would be delivered to the property management company or homeowner’s association.  If either were alerted to a problem, they would face potential legal liability under Tennessee law if they negligently failed to take reasonable action.   Whether fault would be established would depend on a host of factors, including whether the structural problems were brought to the attention of the homeowners and whether the homeowners were willing to pay for necessary repairs.  As mentioned above, repairs were scheduled – the timing of the inspection, the repairs, and what the homeowners were told about the risk would be very important under Tennessee law.

Tennessee law erects at least one more hurdle on claimants in this type of situation.  Remember that it is very unlikely that any architect, engineer, contractor or product manufacturer could be sued under Tennessee law.  And under no circumstances could the state or local government be sued for negligent inspection.  But all of them could be blamed for any negligent acts or omissions by any person or entity sued in the case, and if they were found to be at fault, the recovery of the claimant would be reduced.

An example will help illustrate what I mean by this.  Assume the building was properly designed but improperly constructed some 40 years ago.  Assume the local government inspected the building at the time of construction but negligently failed to identify the poor construction.  Assume  a later inspection identified the defect but the property manager who received the report negligently failed to timely bring it to the attention of the homeowner’s association or the homeowners.   Under these facts, Tennessee would recognize a valid claim against the property manager but would allow the property manager to blame the original contractor and the local government (even though the claimant could not sue them).  Any fault the jury assessed against the original contractor and the local government would reduce the claimant’s damage recovery.

There are still many facts to be learned about the tragedy in Florida, and the facts, whatever they are, impact the legal rights of all involved.  More facts will dribble out in the coming days, but even more facts will be uncovered as part of the litigation process (the “discovery phase” of a lawsuit).  Thus, it will likely take several years before anyone can apply the facts to the law and determine the legal rights of all concerned.

Likewise, Florida’s Legislature has made new laws that make it harder to impose legal responsibility on those who cause harm and undoubtedly Floridians will be shocked to learn how the changes in the law impact the rights of the injured, the dead, and the property insurers.  But one thing is certain:  if this tragedy had occurred in Tennessee, there is no doubt that our law would further victimize those who have already lost so much.