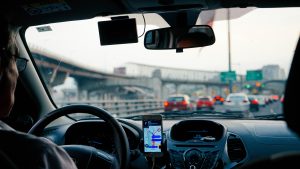 Fatal car accidents caused by aggressive driving have risen over 500% in the last ten years.  The worst of these road rage incidents make the news often accompanied by incredible videos of obnoxious drivers doing crazy things.  Let’s analyze this road rage incident that turned physical and was caught on video and assess how both drivers could have handled the situation better.

First, let’s look at the different forms of road rage and how often it occurs.  80% of drivers have admitted to experiencing road rage.  Some drivers simply make an obscene gesture (33%) or honk in response (45%), while others take the response up a notch.  Consider these stats from a 2016 survey:

As we analyze this video below, we want to be absolutely clear:  physical assault in response to perceived bad driving or rude behavior is never acceptable.

According to the victim in the video, he pulled out of a parking lot, and the driver of an SUV, who apparently felt the victim had pulled out in front of him and cut him off, began to tailgate the victim’s car.  The victim then slowed down.  Next, the victim “showed him the finger”.  At this point, the SUV began to follow the victim and ultimately swerved in front of him.  The victim stopped his car and rolled down his window as the other driver approached on foot.  The driver of the SUV cursed at the victim and then slapped him breaking the victim’s glasses.  Dash cam video from another car showed all of the action after the SUV began following the victim.

Let’s talk about how all of this may have been avoided.  First, do not tailgate even if you think someone cut you off.   Second, if you are tailgated, slowing down or brake-checking could  escalate tensions.  On the video, the victim admits he slowed down but claims it was because he thought he was going to be rear-ended.  Query: if you think you are about to be hit from behind, isn’t the natural reaction to speed up or get out of the way rather than slow down?  Thereafter, the victim flips off the driver of the SUV.  Again, this does nothing to help the situation.   After the SUV driver swerves in front of him and gets out of his car, the better response for the victim would have been to back up and leave or, at a minimum, keep his windows up, lock his doors and call police.

Again, while this victim admitted to engaging in unnecessary and rude behavior, it certainly did not warrant a physical assault.  The issue we are examining is how to avoid escalating a road rage situation, and it really comes down to not engaging with the other driver.  If someone cuts you off, do not tailgate.  If someone tailgates you, ignore them or pull over and let them go by.  If someone flips you off, ignore it.  If someone starts following you, drive to a police station or other crowded area while calling the police.  If someone gets out of their car, either pull away, if you can do so safely, or remain in your vehicle with the windows up and the doors locked and call police.   In short, do whatever you reasonably can to ignore the other driver and get away from them on the roadway.   And if you feel yourself losing your cool, remember that more and more vehicles have dash cams and then ask yourself if you want to be seen on the local news because of your bad conduct.  Or worse, if you want to go to jail, lose your job, etc.  Perhaps the best way to be a better driver is to drive as if the police are watching your every move.

If you or a loved on has been the victim of a road rage incident, contact our office to see if one of our award-winning attorneys can help you.  The initial consultation is free and we handle all accident cases on a contingency basis, so we only get paid if we recover money for you.  Call us at any of the numbers below: