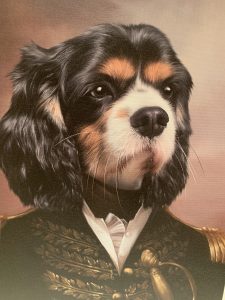 Earlier this week, President Biden’s dog, Major Biden, got court-martialed and sent back home to Delaware after a “biting incident” with a Secret Service member at the White House.  While the news reports indicate that Major got surprised and “reacted in a way that resulted in a minor injury to an individual.”  The White House spokesperson explained the Bidens’ two German Shepherds were still getting acclimated to the White House and all the new people in their lives.  And while that may be true and understandable, this biting incident highlights a number of issues surrounding dog bites and dog attacks and responsibility of dog owners.

Let me begin by saying, we love dogs.  Our King Charles Cavalier, Lincoln (pictured above),  is as spoiled as they come, but the incident with Major Biden reminds us that dog ownership is a responsibility not just to the dog but also to anyone else the dog encounters.  Each year, more than 800,000 people need emergency medical treatment because of a dog bite or attack and children are disproportionately the victims.

In Tennessee, after Dianna Acklen was fatally mauled by three dogs while she was out walking, the Tennessee legislature passed new rules regarding dogs and dog owners’ liability.  Dog owners must keep their dog under reasonable control and not allow a dog to run loose.  In other words, Tennessee has a leash law.  If the owner fails to do so and the dog harms someone, the owner is responsible with a few exceptions.   The law does not apply to a military or police dog that bites someone while performing its official duties.  Likewise, no liability attaches to the owner if the dog bites someone who is trespassing on private, non-residential property of the dog’s owner.  If the dog is protecting the owner or another innocent party from an attack, then no liability applies.  If the dog is confined to a crate or kennel or some other secure enclosure, there is no liability if the dog bites someone.  The law does not impose liability if a person provokes or harasses the dog before it bites or attacks. Finally, if the dog bites someone while on its owner’s residential property, the owner is only responsible if the dog owner knew or should have known the dog was prone to biting.  This is typically demonstrated by showing the dog had bitten or attacked someone before.

Now, let’s turn back to Major Biden.   Apparently, this is not the first incident in which Major has displayed aggressive behavior.  According to news reports, he has charged at other individuals and displayed other agitated behaviors.  Two points from this fact: (1) dogs can harm individuals even when they don’t bite.  For example, a large dog that jumps up can easily knock a human over and cause a broken bone or other injury, or a dog chasing a bicyclist can cause a wreck, etc. (2) as stated above, this type of prior bad behavior by a dog can be used to show that the owner knew of the dog’s dangerous propensity and liability can be imposed even if the attack occurs on the dog owner’s property.

So what is a responsible dog owner to do?  First, train your dog and keep it properly restrained when required. Be especially cautious when introducing dogs to children.  Second, confirm that your homeowner’s coverage provides liability protection in the event your dog causes harm to someone else.  Insurance will not only protect you and your assets but it will help compensate the person who was injured by your dog.  Some homeowner’s insurance will not cover so-called “bully breeds”.  Dog breeds typically considered bullies are German Shepherds, Doberman Pinschers, Rottweilers, Pit bulls, Boxers, Mastiffs, Bulldogs, etc.  If you own one of these breeds and your homeowner’s coverage does not apply, we highly recommend you purchase separate animal liability insurance.

And, of course, if you have been injured by a dog, whether it be a bite or otherwise, we are here to help.  We offer a free, initial consultation and our award-winning injury lawyers have more than 100 years of combined experience in helping injury victims.  Give us a call to see if you have a case.  We handle all injury cases on a contingency basis so we only get paid if we recover money for you.