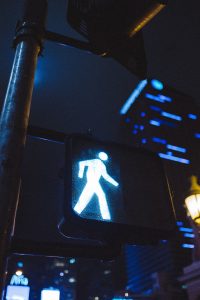 Pedestrian deaths are at a 40-year high.  In 2021, 7,342 pedestrians were killed which was a 13% increase.  In the City of Nashville alone, 28 pedestrians have been killed so far this year.  Read on to learn the most dangerous streets in Nashville for pedestrians, how the city intends to combat the rising death rate and what you can do too.

The City of Nashville has identified the following streets as the most dangerous for pedestrians deaths or serious injuries for 2022:

According to the same study, pedestrian deaths are higher near public transportation stops and in lower income areas of the city, where residents are less likely to have a car.  Both factors result in more people being on foot and more vulnerable to pedestrian accidents.

As a driver, there are a number of steps you can take to avoid a pedestrian accident.  Importantly, some of these same steps can also help you from being injured or killed in a car accident.  First, slow down.  As a result of the pandemic, roadways were less congested and too many drivers used the opportunity to drive faster and they have not slowed down since.  Second, put down your phone to avoid distractions. For years now, it has been illegal to hold a cellphone and drive a car.   Nonetheless, you only need to sit at a busy intersection to see that drivers still do it.  Third, be on the lookout for pedestrians around bus stops or other mass transit locations, school zones and in areas known for lots of foot traffic such as Broadway or The Gulch.  Fourth, do not drive under the influence.  Fifth, do not pass a car that has stopped at a crosswalk but instead assume a pedestrian is crossing and will be entering that lane.  Sixth, observe all school bus rules.  (Read our post here for a refresher).  Seventh, always consider the weather.  For example, if it is raining or snowing, the time necessary to bring your vehicle to a safe stop will increase.  Finally, make sure your vehicle is in good working condition.  If you have an inoperable headlight, it may make it harder to see a pedestrian in the distance.  If your brakes are old, they may not work adequately to avoid an accident.

At the Law Offices of John Day, our award-winning lawyers have been privileged to represent individual and families who have been devastated by a pedestrian death or serious pedestrian injury.  We would be honored to help you too.  We handle all pedestrian cases on a contingency basis so we only get paid if we recover money for you and your family.  Unlike some injury lawyers, we advance all expenses interest-free so you do not have to pay anything out-of-pocket to pursue your legal rights.  To see if you have a pedestrian accident case, simply give us a call for a free consultation.