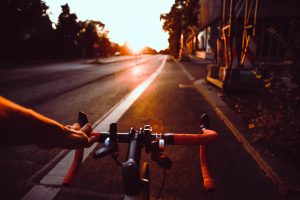 In 2020, which is the most recent, reported data, 932 people lost their lives in bicycle accidents in this country, an almost 9% increase over the prior year.  To be sure, biking has enjoyed an increase in popularity due to environmental concerns, economic issues (bikes are cheaper to own and maintain than a car), the health benefits, and electric bikes help with challenging hills and longer commutes.  But even with better urban planning and an increased availability of dedicated bike lanes, the fact remains that the number one cause of biking fatalities is collisions with motor vehicles.  In 2021, 321 bicyclists were killed on Tennessee roadways.  Read on to learn how you can help lower that number for 2022.

Exercise extra caution at intersections because that is where most bicycle accidents in urban areas occur.  When over-taking a bicycle, state law requires you leave a minimum of 3 feet of distance between your vehicle and the bicycle during the entire passing maneuver.  Likewise, Tennessee law requires operators of motor vehicles treat bicyclists as another motor vehicle.  For example, at a 3-way stop, if the bicyclist arrives before motorists at the other two positions, the bicyclist has the right of way and is entitled to proceed first despite the fact that the bicycle cannot accelerate or go as fast as a motor vehicle.

In conclusion, some of the best ways to keep bicyclists safe are also the best ways to keep you and your passengers safe as well – the often-elusive win-win.   Our award-winning lawyers have been helping bicycle accident victims and other accident survivors for decades and we would be honored to help you too.  We handle all accident cases on a contingency basis so we only get paid if we recover money for you and we advance all case expenses so you never have to pay a nickel out of pocket to pursue your legal rights.  If you would like to discuss your case at zero cost to you, give us a call at one of our three convenient Middle Tennessee locations:

And if you want to learn more about hiring an injury attorney, click on some of the links below:

How to Select the Right Injury Attorney

How to Prepare for a Meeting with an Injury Attorney

How to Represent Myself in an Injury Case