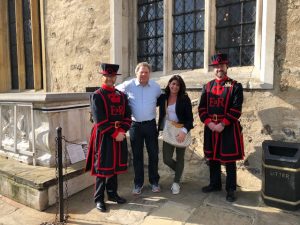 John and I just returned from a meeting of the International Society of Barristers in London.  We had a great time and learned a lot including some interesting information on how Britain is effectively dealing with distracted driving.

While riding in a black cab in traffic, I was observing the other drivers all around us.  Not one of them was using a cell phone.  Not only that, none of the other drivers were eating and driving, putting on make-up and driving, etc.   Everyone was simply driving.  Quite frankly, I was shocked especially given driver behaviors in Tennessee and the rest of the United States.  Truly, have you ever noticed how many people drive with their phone in one or both of their hands?  The next time you are a passenger in a car or a pedestrian walking on the sidewalk or on the street, just look around you.  I think you will be shocked at the percentage of distracted drivers you personally observe, and this is why I was so surprised that I did not see a single driver doing it on our 45-minute cab ride.

Britain did not just pass the law and hope for the best.  To the contrary, in the four weeks after the stiffer penalty took pace, police charged 6,000 motorist with distracted driving under the new law (and this number does not include seven districts).  In London alone, more than 70 drivers a day were caught using a handheld phone while driving.  The steep penalty combined with tough enforcement has resulted in British drivers putting down their phones until they reach their destination.

In 2017 for Nashville alone, there were 496 recorded incidences of distracted driving causing accidents.  Of course, police are not always able to confirm a driver was distracted and sometimes distracted driving gets coded under other categories like “Careless of Erratic Driving” or  “Inattentive”.   Perhaps, it is time for Tennessee and other states to follow Britain’s lead and enact tougher penalties and increase enforcement to help combat distracted driving.

As always, if you or a loved one has been injured by a distracted driver or in some other form of car accident, we are here to help.  Our award-winning lawyers handle all accident cases on a contingency basis so we only get paid if we win.  For a free, no-obligation and confidential consultation, give us a call at 615-742-4880 (Nashville) or 615-867-9900 (Murfreesboro) or 866-812-8787 (toll-free).