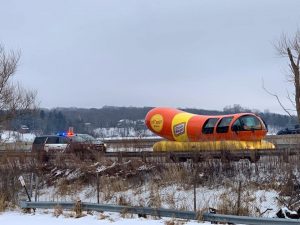 We love this photo for several reasons.  First, this really is the Oscar Mayer wiener-mobile getting pulled over for a driving violation although it looks like it could be a scene from a Jim Carey or Chevy Chase movie.  Second, it happened in John’s home state of Wisconsin.  We can’t help but wonder if it had been a brat-mobile or a cheese-mobile whether the vehicle would have been pulled over at all.  Third, this photo inspired us to remind Tennessee drivers of some important laws so that they are not an Oscar Mayer wiener.  So read on to find out what the wiener-mobile did wrong and what you can do right.

According to news reports, Wisconsin law enforcement pulled over the Oscar Mayer wiener-mobile because it failed to move over as it approached an emergency vehicle.  Tennessee has a similar law which requires drivers to move over to the adjacent lane if it is safe to do so.  If a driver can’t move over safely, the driver must slow down as they pass.  This law was initially passed to protect emergency responders such as police, ambulance personnel etc. as they handled accidents and other issues on the roadway.  Later however, Tennessee updated the law to also include utility vehicles.  But honestly, this should apply to anyone who is on the side of the road.  It really is not that much to ask to either move over or slow down to prevent an accident.  While the driver of the Oscar Mayer wiener-mobile got a warning, if the police officer is not feeling generous, Tennessee drivers could face a $500 fine and 30 days in jail.   Yes, you read that correctly.  Tennessee is serious about preventing these types of accidents.

In addition to the Move Over law, here are a couple more that Tennessee drivers need to remember:

If you or a loved one has been injured in a car, bicycle or pedestrian accident, our award-winning lawyers are here to help.  We offer a free, initial consultation and we only get paid if we recover money for you.  Give us a call at any of our three convenient Middle Tennessee locations: